How is AI Transforming the Media and Entertainment Industry

HomeWeb How is AI Transforming the Media and Entertainment Industry
May 12, 2022 by adminpuminatidigital Web 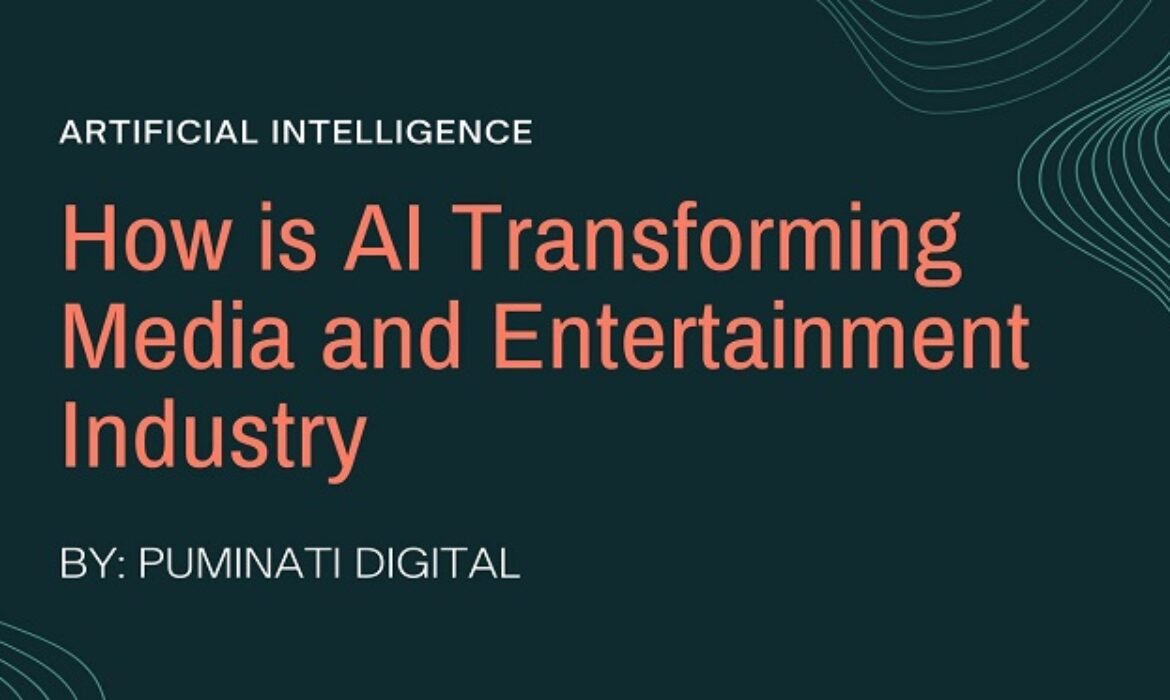 Artificial Intelligence is an ever-growing field that is evolving for the betterment of human lives. Let us look at what the statistics say – It is predicted that by 2025, the market for artificial intelligence software will rise from the current $10 billion to $118 billion. We can imagine the growing popularity of AI that is responsible for its rapid growth. The rise of Artificial Intelligence is not just limited to any one particular sector. Instead different industries have been occupying this technology like banking, healthcare, e-commerce, and so many more. This technology is also making its presence in the media and entertainment industry which has made it possible to give the users some out-of-the-world content.

Artificial Intelligence has always been a part of the entertainment industry. You must have watched movies such as Matrix, Terminator, I-Robot, and Avatar. These movies were way ahead of their times in terms of story, direction, and editing. Artificial Intelligence played an important role in the making of these masterpieces. So, artificial intelligence has been in the media industry for a very long time but it was not very common. But with time much software has been developed thus reducing the cost and increasing the quality.

Without further ado let us look at How is AI Transforming the Media and Entertainment Industry.

Artificial Intelligence programs will prove to be effective and further assist in designing advertisements and trailers for media industries. Also, it can be used for other marketing aspects such as film promotion, design, and advertising. There are many AI-based graphic tools that can make marketing processes much faster just by doing predictive analysis. With these tools, you can create visual designs a hundred times faster if you compare them to human work. You can produce around 8000 banners per second which are quite impossible for any human to beat.

The magic of AI is such that you will be amazed to listen to what IBM did with a movie trailer. IBM released a trailer of a horror movie named ‘Morgan’ and that too by using artificial intelligence. They built an AI system and the research team trained it to select the spectacular moments from the movie. They trained it by letting it watch the scenes of 100 horror movies which were later analyzed based on visual and audio effects. The final product was quite amazing. The AI program made a 6-minute-long trailer and that too within 24 hours. How amazing is that!

In today’s time, we are very much relied upon the Personalised User Experience. Also, it has become the most important strategy in terms of growing the business. Let us learn it from an example – You are quite familiar with ‘Netflix’ which is one of the largest platforms in the media and entertainment industry. It has around 100 million worldwide users who use it daily. The AI program in Netflix predicts users’ preference choices based on the user’s watch list. Behind all this is the deep learning algorithm of Machine Learning which identifies users’ choices and preferences and accordingly shows content recommendations.

Another example of AI in the media and entertainment industry is IRIS. The advanced analytics capabilities of AI can directly impact marketing strategies for your product or service. Thus, it makes life easier in terms of determining and creating business plans to increase revenue based on your customers’ experiences.

If you look at the reports by Global Entertainment and Media Outlook, virtual reality will be the fastest-growing sector in the entertainment and media industry. It is expected that within 3 years 68 million VR headsets will be used in the USA alone thus generating revenue of $5.0 billion.

So these were some points on How is AI Transforming the Media and Entertainment Industry. It is needless to say that there are no positive effects of AI Programs in the media industry. It is playing a major role in making this sector efficient and is a boon for the entertainment world. To read more about such interesting topics you can head on to our blog sections.