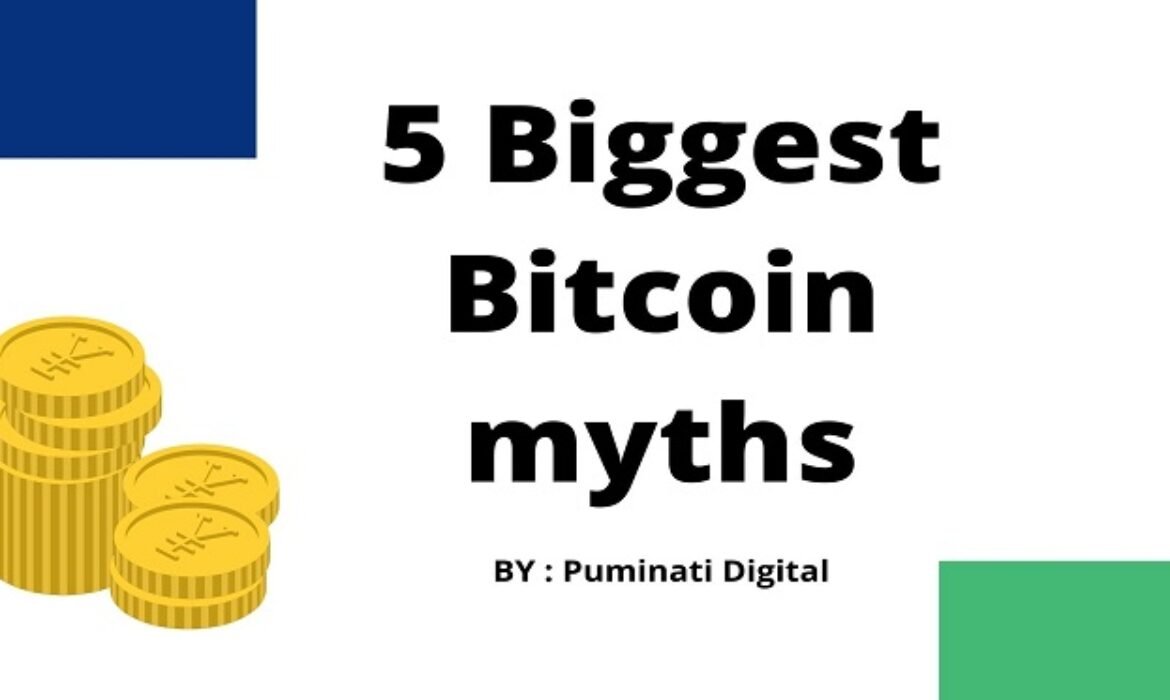 Bitcoin is a name that comes to your mind whenever someone speaks of cryptocurrency. How was this digital currency formed? Bitcoin was created in January 2009 by pseudonymous Satoshi Nakamoto, who is still a mystery. What is the reason behind the success of Bitcoin? The best thing about cryptocurrencies is that they promise fewer transaction fees than any other traditional online payment method. Also, it is a decentralized currency, unlike government-issued currencies.

Recently, Bitcoin has been in talks and is at an all-time high. It has broken all records, and we don’t even know how far it will reach. Since it is gaining so much popularity, we at Puminati Digital present the 5 biggest Bitcoin myths that people have about the first cryptocurrency. Also, we will talk about the merits of this cryptocurrency and will clear all your doubts. If you think the value of Bitcoin is based on nothing or it is too unreal for this real-world, then this blog is definitely for you. Let’s not wait and get on with our topic, 5 Biggest Bitcoin Myths.

1. Bitcoin is a Bubble

There is speculation that usually, some people invest in Bitcoin because they seek significant returns in the future. But it doesn’t mean it is a bubble. What are bubbles? Bubbles can be defined as economic cycles characterized by unsustainable rises in market value. How did the market value increase and the bubbles form? So, when investors realize the price is much higher than the asset’s fundamental value, the market value eventually rises, creating a bubble. When Bitcoin first made its long leap, it was being compared to an infamous early bubble- the 17th-century Dutch “Tulip Mania.” In the year 1637, specific varieties of tulip surged 26-fold. The bubble was created and lasted six months. Later it crashed and wasn’t able to recover.

2. Bitcoin has no Real-World Issues.

Many experts and critics have claimed that Bitcoin is and would not be very essential in the real world. Some even said it could be helpful but only for criminals or any other illicit activity. Both statements are highly incorrect. Bitcoin is not a new concept now. It has been with us for more than 10 years. With Bitcoin, you can make payments to anyone in the world without any mediators, such as banks. Also, big investors continuously use it as a gold-like hedge against inflation.

3. Bitcoin doesn’t have any real value.

Many think that Bitcoin is not backed by any physical asset like gold or any other modern fiat currency, so it doesn’t have real value. There are fixed amounts of Bitcoins that have to be mined, also known as bitcoin mining. So it is designed in a hard-coded manner with the main motive to be scarce and resistant to inflation. Inflation usually occurs when significant fiat currencies are created, thus diluting the existing supply.

4. A competitor will replace Bitcoin.

It is being speculated that another cryptocurrency will soon overpower Bitcoin in the future. We cannot predict the end, but it is the first successful cryptocurrency globally. Whatever people may say, till now, there has been no digital currency that is even close to Bitcoin. New cryptos have been formed and promise new features and advantages, but Bitcoin has still not been affected by any new currencies.

5. Investing in Bitcoin is gambling.

People are afraid of investing in cryptocurrencies as they compare it to gambling. But is this even true? If we look at the growth cycle of Bitcoin, its price has grown significantly over the last decade. It is an excellent achievement for such a young market continuously increasing. The bitcoin market cap has exceeded $1 trillion, has made a robust regulatory structure in countries worldwide, and has helped attract a wave of institutional investment (Tesla, hedge funds).

These were the 5 Biggest Bitcoin Myths that we at Puminati Digital think are misunderstood by the people. If you want to read more interesting articles like these then head over to our website’s blog section. Puminati Digital is a digital marketing company that has its presence in Haldwani, Uttarakhand. To avail of our services contact us now or you can visit our website for more information.